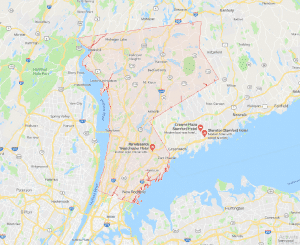 Westchester County is a county in New York, and it is the second-most populous county on the mainland of New York (second to the Bronx). Westchester county has a population of about 980,000. The county is located in the Hudson Valley and consists of six cities, 19 towns, and 23 villages. The most populated city in Westchester County is Yonkers, but the other cities include Mount Vernon, New Rochelle, Peekskill, Rye, and White Plains.

The upper part of Westchester county covers the most land. This area includes the city of Peekskill as well as the town of Bedford and Yorktown.

Westchester countyoffers a few notable historical sites of New York that are worth visiting. This includes the Timothy Knapp House, which is the oldest standing building in Westchester. It was built around 1670, along with the Philipse Manor Hall and the Old Dutch Church of Sleepy Hollow, both of which were built in the 1680’s.

Westchester County has been a hot spot for popular culture over the years. It has been home to many novelists, including Washington Irving. Irving’s most famous work is his “The Legend of Sleepy Hollow”, which is set in the previously mentioned Dutch Church of Sleepy Hollow, along with other locations in Sleepy Hollow. The popular X-Men comics and film series takes place in a fictional area within the county, near the Salem Center. There are also many Television shows that take place here or are featured, including The Dick Van Dyke Show, Friends, How I Met Your Mother, and Mad Men.